Discoveries go even further than hoped 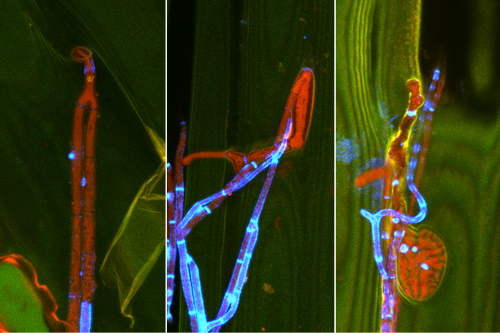 Confocal images of hyphae of Epichloë festucae emerging from the inside of the plant. Credit: Dr Kimberly Green

New Zealand’s pastoral economy is based on a symbiotic relationship between a fungus, Epichloë festucae, and perennial ryegrass (Lolium perenne). The grass gives the fungus a place to live, and the fungus in turn produces chemicals that stop insects from eating the grass. This is why farmers don’t have to spray fields, even though we have to spray crop plants routinely. However, when we began Project 4 six years ago, no one knew the molecular basis of this system.

These two discoveries have considerable potential to improve the choice of fungal strains New Zealand farmers use when seeding new pastures. Grass seed with new strains is already in commercial use, and these findings will lead to the strains used in second-generation grass seed products.

Scientifically, this work is increasingly recognised as the premier example of a grass-fungus symbiosis. Our molecular work is widely cited, and our findings are being used internationally as the basis of studies on other species. Many of these international studies involve the New Zealand scientist team as collaborators.

We have managed to make scientific discoveries at a level that we did not envision when we designed the project. A combination of a strongly connected team with complementary skills enabled us to ask scientific questions at a top international level, which is reflected in the international standing of many of the project’s publications.