An indigenous New Zealand fungus may help to control wilding pines – one of the country’s most ecologically damaging weed species – a student’s research project shows. 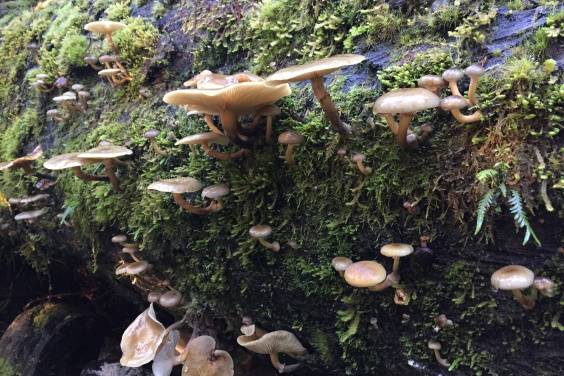 ​Wilding pine control costs New Zealand millions of dollars a year, and involves the costly and time-consuming methods of cutting down the trees and spraying herbicide from the air. Control seldom totally eradicates the pines, which often reinvade sites some years later.

Armillaria novae-zealandiae, also known by Māori as harore, is a fungus that feeds on decaying wood. It is common in native forests, where it is a natural part of the ecosystem, helping to decay fallen trees. But if it gets into pine plantations it is seriously destructive, killing seedlings and reducing growth.

Supervised by BPRC principal investigator and University of Canterbury Professor Ian Dickie and his colleague Dr John Pirker, she tested what age of wood it grew best on (ranging from live and freshly harvested wood to old and decayed wood).

“The research aimed to address knowledge gaps in our understanding of Amillaria, and eventually investigate whether we could use it as a biological control of invasive pines,” says Genevieve.

“Some of the questions we have about using it, for example, are whether we can introduce it to grassland areas that are susceptible to wilding pine invasions, where it doesn’t currently exist, and whether introducing it at the same time as pines are felled would prevent reinvasion.”

Her results were promising. “Armillaria novae-zelandiae showed the best growth,” she says. “We tested several isolates of this species and all of them grew larger than the other Armillaria species. It also consistently grew most vigorously on live or freshly-felled pine wood.”

“Armillaria’s strong growth on live or fresh pine wood is important,” Genevieve says. “It’s really promising that all the fungi grew best on live or fresh wood, as this implies that we could potentially design a way to inoculate wilding pine sites with Armillaria at the same time we are manually clearing trees and using herbicide. That could be practical and economical if we don’t have to plan more site visits to use the fungi.

“We also want to find out if this will accelerate decomposition and reduce wildfire risks.”

Genevieve said A. novae-zelandiae has been used as a food source by Māori, who should be involved in continuing research. “Using it as a biological control may be of particular interest to iwi in areas badly affected by wilding pines, as a way of protecting landscapes and ecosystem values.”

Prof Dickie said his group was seeking funding to continue the research, particularly looking at how Armillaria affected native seedlings, to test whether it could be used to clear pines in areas where ecological restoration was planned.

You can view a video of Genevieve Early presenting her research here.