Home | Native plants may be weapon against soil contamination

Native plants may be weapon against soil contamination 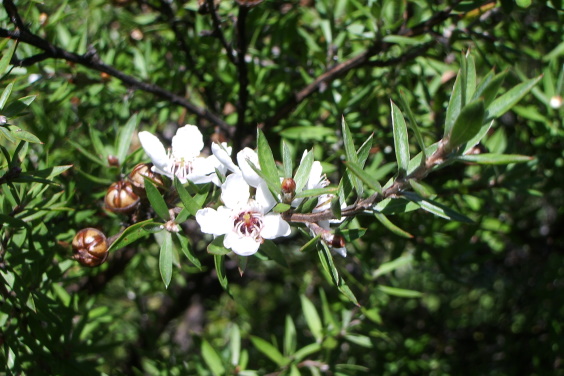 ​Researchers from the Bio-Protection Research Centre, ESR, and the University of Canterbury have shown northern rātā (Metrosideros robusta) and swamp mānuka (Leptospermum scoparium) can reduce the amount of Escherichia coli (E. coli) in soil by 90%, compared with ryegrass (Lolium perenne), and in less than one-third of the time. They worked in partnership with Ngaa Muka Development Trust and Matahuru Marae in Waikato.

The research, published in Applied Soil Ecology, aimed to investigate the antimicrobial properties of New Zealand native plant extracts and test if they were effective in soil.

Swamp mānuka, northern rātā, and horopito showed antimicrobial properties, and so they were tested to see if they reduced bacterial contamination in soil.

The scientists grew seedlings in pots, and, once the seedlings were large enough, added equal amounts of dairy shed effluent to each pot. They watered the pots to simulate rainfall, and then tested for E. coli on days 1, 3, 7, 14, and 21.

Results indicated the amount of E. coli in the soil would reduce by 90% by day 14 in the pots containing swamp mānuka and northern rātā. “Extrapolation from L. perenne data indicated that this reduction would happen by day 45.”

The roots of swamp mānuka and northern rātā both increase soil acidity, which researchers suggest may have caused the faster E. coli die-off.

“E. coli tends to do better in soil that is alkaline to neutral pH,” said Dr Hossein Alizadeh, of the Bio-Protection Research Centre. “The roots of swamp mānuka and northern rātā change soil to make it more acidic, so that may be why E.coli dies off more quickly.”

However, the researchers did sound a note of caution. When soil was already saturated, irrigating it with dairy shed effluent resulted in E. coli leaching out of the soil very quickly before any plants could dilute or destroy it. This suggested that “high irrigation regimes” could result in more environmental contamination.

The authors say their results show the need for further field research.

“Future research in field conditions would show the potential and/or limitations of bioactive plantings for preventing faecal or microbial contamination of freshwater resources from contaminated soil.”