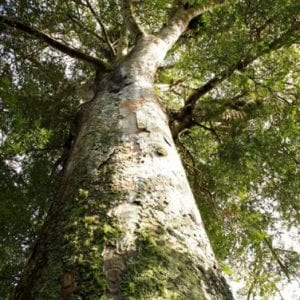 In every ecosystem, seemingly invisible wars are being waged between pathogens and their targets.

​Plants are under constant threat, and in response have developed a complex immune system to help defend themselves from pathogens.

In turn, pathogens have developed weapons to overcome these defences, leading to an ongoing arms race as each one adapts in an effort to win the battle.

Scientists understand well how this arms race works in agricultural plants, which are mostly flowering plants (also known as angiosperms). Some of a pathogen’s most important weapons are proteins called effectors, but often the target, or host, plant defends itself with specific receptors that detect these effectors and trigger its immune system into action.

But scientists do not yet have a good understanding of the arms race between forest pathogens and the coniferous (or gymnosperm) trees they infect.

New Zealand kauri is an ancient, iconic, gymnosperm tree that is under threat from a lethal dieback disease caused by a fungus-like organism called Phytophthora agathidicida.

First recorded on Great Barrier Island in the 1970s, in the early 2000s P. agathidicida was discovered on mainland New Zealand, killing trees in the major remaining kauri forests of the northern North Island. With only 1% of the original old growth kauri forest that once dominated this area remaining, the race to defeat the pathogen is urgent.

So far, P. agathidicida seems to have been winning this particular war. But scientists have been joining forces to help understand how it causes disease, and how kauri can defend itself. They have been investigating microbes in kauri forest soil to see what part they play; the impact of forest fragmentation on the spread of the pathogen; treatments that may delay the disease, or even cure it; and even the possibility of breeding kauri that are resistant​ to the disease.

One study by my team of Bio-Protection Research Centre scientists has now revealed a likely avenue for defence that could help us to learn more about resistance mechanisms in kauri. We identified a set of P. agathidicida effector proteins and tested them to see if, like other Phytophthora pathogens that target angiosperm plants, they interact with the immune system of Nicotiana (tobacco). Our results show that indeed, they do.

This work suggests that P. agathidicida may use similar molecular weapons as other Phytophthora species that target angiosperm plants. And there may be other parallels that help us understand what’s going on.

Not only does the discovery give scientists an important foundation for studying plant-pathogen interactions between kauri and P. agathidicida, but it also provides a path for researching how pathogens interact with gymnosperm forest trees in general.

Understanding forest pathogen effectors will help scientists to predict how forest trees and their pathogens co-evolve. And it could help us to detect immune receptors in breeding populations, and eventually breed for resistance. Notably, candidate immune receptors identified using the approach we used might ultimately provide molecular markers that mean forest trees can be selected for resistance.

Disease resistance in forest trees – including kauri – is very complex, involving both genetic and environmental factors. The long-lived nature of trees also means that understanding the evolutionary ecology of the forest is critical to ensure long-lasting resistance.

We need a holistic approach to tree health that involves all aspects – from genetic resistance to population diversity to the dynamic microbiome – to save kauri.

But by understanding the biology that influences resistance and susceptibility, and how the arms race works, New Zealand is in a much better position to craft defence strategies that protect kauri, and other precious species.