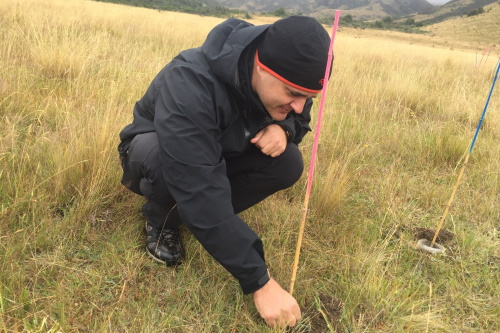 What role, if any, do the interactions between species play in determining the success of invasive exotic plants on New Zealand ecosystems?

Our research largely reversed the long-held paradigm of “enemy escape”, the theory that a loss of species interactions contributes to the success of exotic species. Instead, we showed that species interactions mediate ecosystem processes and functioning in complex and surprising ways.

In field-based experiments, we showed that exotic plants have stronger, rather than weaker, interactions with herbivores and with beneficial and pathogenic fungi, and so facilitate further invasions. We also showed parallel patterns in productive ecosystems, where land-use change is associated with an increased, rather than decreased, diversity of plant pathogens, driven by changes in the composition of plant species.

Our research moved beyond descriptive approaches to direct scientific tests, by creating 180 independent soil-biota-plant-herbivore communities in controlled conditions. This experiment provided one of the first direct tests of community-level interactions involving exotic and native plants with soils, fungi, and herbivores.

We conclusively showed that the impacts of exotic plants on multiple ecosystem functions are mediated by biological interactions with soil biota and invertebrate herbivores. Exotic plants in these ecosystems show much higher growth rates than natives, and are able to dominate communities despite supporting high populations of herbivores and pathogens. Again, these interactions may be key to success, with pathogen spillover on to natives contributing to exotic plant dominance.

Our research showed that the global movement of species results in stronger and more variable interactions, rather than interaction loss. These strong species interactions are crucial to plant invasion success and impacts in both native ecosystems and exotic-dominated landscapes, such as agriculture and forestry.